Grabbing a Frame from a Video with Adobe Premiere Pro

Here are two pictures of my Peace Corps training group in Togo (1985). I believe we are in Atakpame (maybe one of them is in Lome). During the stage (a French word), we learned French, Ewe and also did a lot of practice teaching. In the Peace Corps, I taught math at the high school level, things like algebra, functions and calculus. We trained the students to take their Bac, which is a super difficult end-of-the-year test covering all the subjects they studied during the year. We were also introduced to Togolese food by the kitchen staff. I still remember eating akple (corn porridge) for the first time and not really liking it. Actually, I never ended up liking it (as opposed to fufu, which I love). 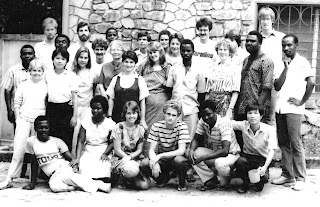 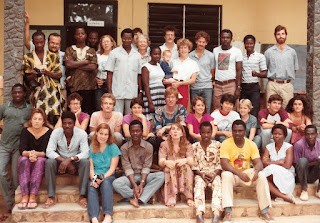 Email ThisBlogThis!Share to TwitterShare to FacebookShare to Pinterest
Labels: Personal

A Note on Quantifying into Questions and Functional Readings (Collins 1992)

A Note on Quantifying into Questions and Functional Readings

In this blog post, I outline what is perhaps my most successful classroom activity. The basic idea is to have the students help each other to develop their paper proposals.

By doing this activity, students gain concrete skills in writing academic paper proposals, thinking critically about their own proposals, and giving constructive criticisms of other’s work.

Email ThisBlogThis!Share to TwitterShare to FacebookShare to Pinterest
Labels: teaching

A- versus A'-Movement (Class Exercise)

I got my first Covid-19 shot yesterday, Sunday March 21, 2021. In this blog post, I give the background leading up to the shot, and details about how I arranged it. I seriously doubt anybody will find this interesting, but in 10-20 years perhaps my future self and grandchildren might want to read it.

Email ThisBlogThis!Share to TwitterShare to FacebookShare to Pinterest
Labels: Personal

On the Form and Function of MERGE (video by Daniel Seely)

Abstract: This talk explores the form and function of the most fundamental operation of the Narrow Syntax, namely Merge. First, we'll give a history of structure building devices, from PS rules through successive stages in the development of Merge--from its introduction in Bare Phrase Structure (Chomsky 1994/95) to its formulation in Problems of Projection (Chomsky 2013, 2015, see also Epstein, Kitahara, Seely 2015) and finally to its most recent characterization, as MERGE—note upper case (Chomsky 2017, 2018, 2019, 2020), Epstein, Kitahara, Seely (2018, 2020). Next, we trace the "Maximize Minimal Merge" program (Epstein, Kitahara, and Seely, among others): The idea is to maximize the effects of Merge, while minimizing its form, positing internal to the Narrow Syntax as little as possible beyond simplest Merge (Merge(X, Y) = {X, Y}). Finally, we consider the current ‘state of the art’, in the form of MERGE (i.e. Chomsky’s most recent characterization). MERGE applies to the Workspace WS (which is formally recognized and incorporated into the theory) and not directly to syntactic objects themselves. We provide a detailed examination of this re-conception of Merge, tracing its form and function, and certain challenges that it may give rise to, and  also revealing important consequences in a number of empirical domains, and its implications for the theory of Narrow Syntax