In this post, I walk you through what a typical middle class house in Gaborone, Botswana looks like (the neighborhood is Block 6). This house is in no way unusual for Gaborone. In fact, there are many neighborhoods where the houses look more or less like this (e.g., Block 7 and Block 8). Of course, there is much more expensive housing in Gaborone too, especially in Phakalane. And there is less expensive housing too, in places like Mogoditshane (just outside of Gaborone, on the road to Molepolole).


Most of the people in my neighborhood are Batswana, but there are a fair number of Zimbabweans and Indians as well. There are some Chinese people living in the neighborhood who are working on building a hotel. I have not seen any other Americans.

One theme of the pictures below is the set of security measures we have taken to prevent magodu (thieves) from breaking in. When I was living here in 2015-2016, the house was broken into. My wallet (including driver's license) and several thousand Pula were stolen in a very carefully orchestrated break in. Since then I have tightened up the security quite a bit.

Below is the front gate. It is controlled electronically, I need to press a button on my keychain to get in or out. In my neighborhood everybody has gates, and the vast majority of them are electronically controlled. 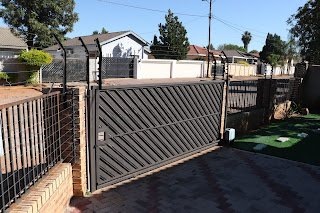 On the left hand side of the above picture, you can see the electric fencing that surrounds the property. If you touch it, you will get a shock. It is connected to an alarm and is on 24 hours a day. The vast majority of properties in Block 6 (and similar neighborhoods) have this kind of electric fencing.

Below is an outside picture of the gate. As you can see the area outside of the gate and wall is a bit scruffy since we have not dared to leave the property for a month. Normally, we would pull the weeds and sweep the ground every week. 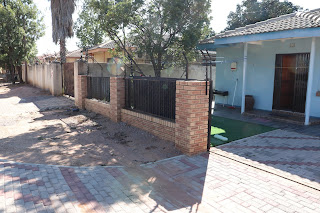 Below is a picture of the front yard. There are concrete foot prints leading up to a concrete duck. The grass is plastic. The vast majority of people in the neighborhood do not have real grass in their yards. There is not enough rain. To have such grass would be an extravagance. They either leave the yard as packed dirt, or more frequently pave it in some way (with bricks or concrete). When we bring the language consultants to Gaborone, they love to sit on mats in the front yard under the tree during break and lunch. 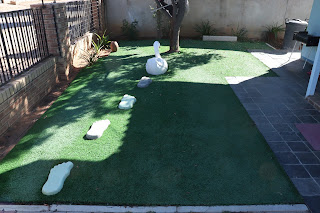 Below is a picture of my grill. I got it for 200 Pula (20 dollars) at Builders Warehouse. In southern Africa, they call roasted meat "braai", and it is very popular. We love to grill our food. In a NYC apartment building, grilling outside on the balcony is completely prohibited. 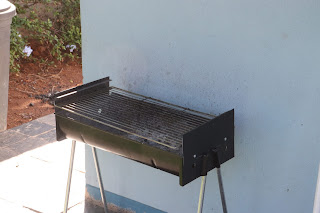 Below is a picture of the neighborhood on the road from my house. As you can see, the other houses also have walls and gates, and a tree or two in the yards. 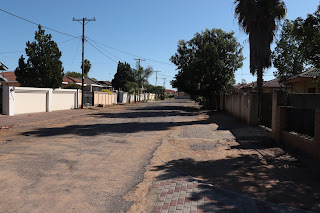 Below is a picture of our front door. As you can see, there is a very strong metal gate protecting the door. Most homes in the neighborhood have these gates. 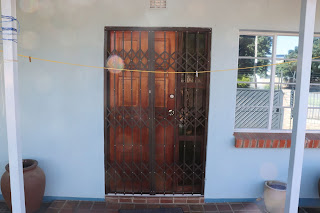 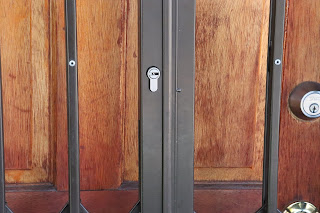 Below is another picture of the electric fence, facing the street. In the second picture below, I give a close up of a metal ring that we attached to the fence to prevent magodu from lifting the fence wires to slide under them. The third picture below is of the little lizards who live on the wall, and bask in the sun. 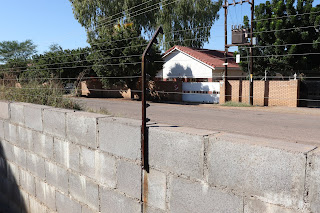 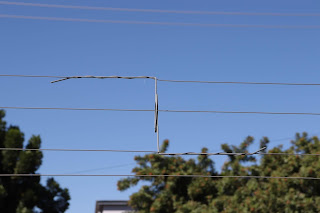 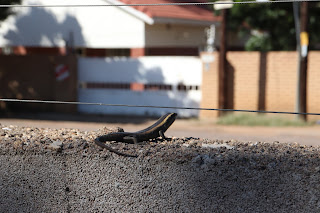 The electric fencing is actually a package deal with a security company. When somebody tries to break in, it sets off the alarm on the electric fence. The security company is then supposed to arrive in a few minutes to check out the problem. Unfortunately, the fences are sensitive and can be set off by birds and by tree branches and leaves coming into contact with them. Various security companies (serving different houses) patrol the neighborhood in cars. They all know me, so they wave to me and say hello when they drive by. In addition, a significant fraction of the property owners have a dog or two.

Below is a picture of the same wall but taken from the street. As you can see, I had all the grass and thorn bushes cleared from the side of the house. This took around 2,000 Pula (200 dollars) to do, including having it carted away. 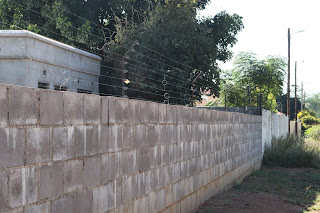 The photo below shows the sign for "Neighbours, Your Daily Spa". Before we moved in, our house was a beauty salon. Notice the services: waxing, facials, manicure, pedicure, massage, exfoliation and Carribean tan. People still call the landline in the house. Once when I accidentally left the gate open, a very muscular young man just walked into the house and asked about services. The other kind of business one often sees in the neighborhood are small bed and breakfast places. There is also the occasional tuck shop, although these are rare in Block 6. 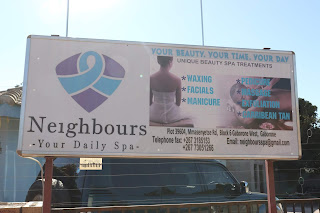 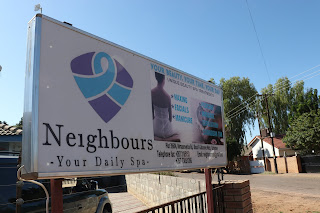 Below is a picture of the geyser on the side of hour house. The geyser is a concept that is probably unfamiliar to most Americans. In southern Africa, if you want to take a hot shower, then you turn on the geyser about an hour before the shower, and the water heats up. If you forget or if the geyser malfunctions (which happens from time to time), then you take a cold shower. 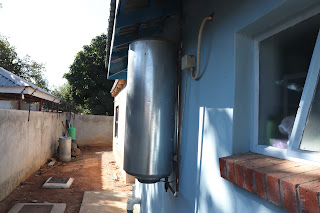 Below is a picture of the bedroom window, and the roof of the house. As you can see the windows are reinforced with metal bars. Any potential legodu would have to be very small, and would also have to spend a lot of time clearing broken glass. 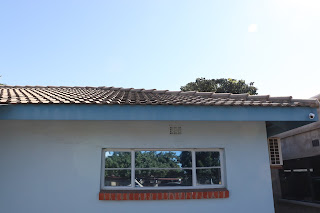 Do you remember my crash, where my vehicle was completely destroyed.

Here is the vehicle now in the picture below. It cost me 20,000 Pula (2,000 dollars) to get it repaired. The frame and the engine were untouched, so it was the outer body that needed repairs. Surprisingly the most troublesome aspect of the repairs is the electronics (windows, alarm, locks, etc.). I am still working out the kinks there. I can recommend my panel beaters (Moma, in Gaborone West Industrial). They did take a long time (nearly a month), but they were friendly and responded to follow-up issues quickly.

Note there is no garage for the house. This is typical. People do not generally have garages. Sometimes they have a shade that they park the car under. But typically people just park the car next to the house within the security fence. 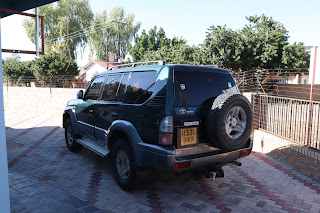 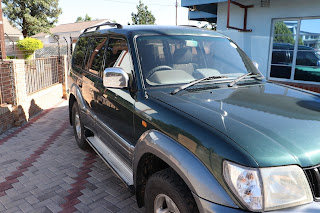