In working with the Cua this summer, Zach and I have developed an easy high-quality video set up which we call "run-and-gun" (following terminology used in the video world).


The DSLR camera is attached to a portable tripod, and then a shotgun mic is attached to the top of the camera (see below for brands and prices). The arrangement can be set up in less than five minutes, and produces excellent sound and video. Pictures of the set up are given at the end of this post.

I am definitely not advocating this set up for all situations and all people. Different people have different needs and different levels of expertise in video. But in certain circumstances the run-and-gun set up can be useful. Also, I am not an expert on these matters. I am just reporting what we have found in the field. If people have feedback, they should write to me at cc116@nyu.edu, and I will post it in my Blog.

There are a few drawbacks of the arrangement. Since the mic is attached to the camera, it is not possible to get too far away from the subject. The further away you get, the worse the signal to noise ratio. You always want to get the mic as close as possible to the subject's mouth, to get the best signal to noise ratio. I have not tested now sound quality drops with distance, but I would guess that four to eight feet would be OK with this set up.

Also, since the shotgun mic needs to point at the speaker's mouth, the speaker needs to be in the center of the frame. A consequence is that shooting a scene with two speakers would entail moving the camera back and forth between them in order to point the mic at the person speaking. Such movement would have a jarring effect in the video. With a boom pole or lavalier mics, there are no such constraints and there are many more framing options.

Another drawback is that you cannot monitor sound. There is no earphone plug in the mic or the DSLR camera (see the equipment list below). The Rode mic does have simple recording volume controls (neutral, -10db and +20db). Neutral usually works well. Do not turn on +20db for a loud speaker.

Correction: If you go to Menu/Shooting Settings/Sound Recording, it allows you to monitor sound. So you can do a small test before shooting to see if the sound is OK. You cannot monitor sound at the same time as monitoring the image.

The advantage of the run-and-gun arrangement is that it is possible to get high quality sound and video with a minimum of set up. There is no need to adjust a boom pole, and no need to run lavalier mics up the subjects jacket. So run-and-gun is useful if you are on the road, and have limited time for set up. And it is easy to use if you are alone, when you do not have somebody to be the sound recorder.

Another advantage is that the you do not need to use a program (such as Adobe Premier pro) to merge the sound and video files. There are together right away, and can be played back right away on the computer. However, to use the video in ELAN, you will have to pull apart the video and sound file later (e.g., using Adobe Premier Pro).

This is attached to a portable Manfrotto tripod (295 dollars)

On the top of the camera is attached a Rode shotgun mic (299 dollars):

https://www.bhphotovideo.com/c/product/1350282-REG/rode_vmp_videomic_pro_on_camera_shotgun.html
\
Here is a checklist for setting up the run-and-gun arrangement, specific to the equipment listed above: 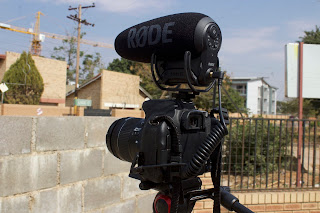 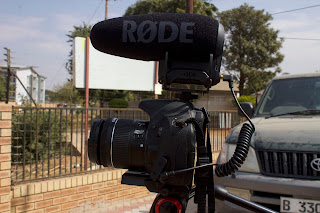 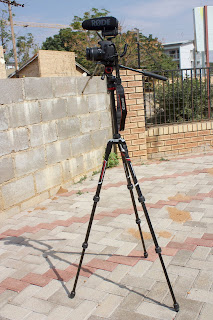 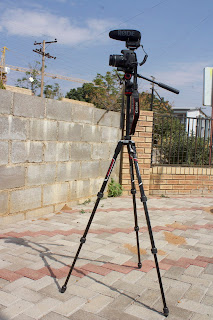 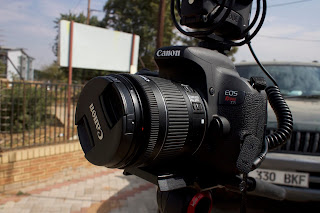