On February 1, 2020, at around 4:00pm, while driving home from the cattle post, my wife and I were involved in a horrible car accident. We had just gotten on to the gravel road, from the cattle post road, and I lost control of the car. The car spun 180 degrees to the right, and then flipped over 270 degrees onto the driver’s side. The top of the car is crumpled in, and the front windshield is completely shattered. The car is basically destroyed, and will be written off by the insurance company. Some pictures are at the end of the post.

By some miracle difficult for me to comprehend, my wife and I both walked away from the accident with only small scratches, minor bruises and headaches. We are both alive and neither of us had any broken bones. I am quite sure that if we had not had our seat belts on, we would be dead by now. We would have been jettisoned from the vehicle, and struck the road. There is absolutely no question in my mind about that.

Another miracle is that all my research survived intact. I brought my computer and camera and hard drive with me, and they did not get a scratch. They just tumbled onto the gravel road when the car had stopped and got a bit dusty, but nothing was damaged. I had not backed up last week’s work either.

I am thankful that nobody else was in the car with us when this happened. I think that people in the back seat would not have survived (especially without seat belts on). There are plenty of stories in Botswana of people dying in similar accidents, where the car swerves out of control and rolls over.

I am still not entirely certain how it happened. What I know is that I was going well under the speed limit (80km/hour). But the road is heavily corrugated, with huge hard bumps all along it. And the sand in that area is white, which for some reason or another is very slippery. I believe I hit a bump, which caused me to go into the air and my wheel to deviate to the right. When I came down, the left front tire snapped off the wheel (probably because it is a tubeless tire), and I lost control.

My lesson from this is to slow down to a snail’s pace the next time I drive on gravel. Maybe even 20 or 30 km/hour. Driving on gravel is really very different from driving on a paved road, but it is easy to forget that. It is better to be late and survive, than to die on a gravel road. If you are dead, it does not matter how much time you have saved.

The car came to rest on the small ridge that you find on the sides of some gravel roads. This allowed us to crawl through the driver’s side window onto the road. Luckily, I had been driving with my window open. If the window had been closed or if the car had come to rest directly on the road (not the ridge), I don’t know how we would have left the vehicle.

In spite of horrible cell phone reception in the area, I managed to call Andy (my colleague) and Erich (my mechanic friend). Then they arranged for Erich to come and help me with the car and tow me. As we were waiting, many Batswana came to our aid. Some of them gave us water and one lent us a chair to sit on. Then others stopped to help me get the vehicle upright onto its tires. I am grateful to all of them. As I said in the last post, Batswana will try to help you out in a time of need.

The vehicle came to a stop right next to a thorn bush. So the thorn bush had to be cut away. The people who stopped had a small axe, and a grass cutting blade. They cleared away the thorn bush for me, which is very rough work because of the thorns. Then another man drove his 4x4 into the bush on the side of the road, and attached the bottom of my car to the back of his 4x4, and pulled. While he pulled about 5 men pushed, and the vehicle rolled over onto its wheels. From there, it was driven back onto the road.

The Sojwe police arrived at night (around 8:00 I think), inspected the vehicle and the site of the crash, and took my statement. They also helped me to put the spare tire on. There was one man and one woman on the team. They were very friendly and helpful, and helped me to pass the time until Erich arrived.

The police told me that car would probably be written off by the insurance company because it is destroyed, and that we would receive an insurance payment. The only factor that would prevent payment would be if I were driving under the influence. But since I never drink (or smoke marijuana, or do any other kind of drug), I was not under the influence, which the police officer noted.

Erich arrived at around 11:30 at night. He checked the vehicle, and discovered it was still drivable. Therefore, I did not need to be towed. So the police drove my vehicle to Sojwe (about 50 kilometers from the crash site), accompanied by me (in the police vehicle) and Erich (in his vehicle). There, we met up with Andy who had driven all the way down from the north of Botswana when he heard of my accident. Andy then drove us home to Gaborone, leaving the vehicle in Sojwe. We arrived in Gaborone at 3:00am in the morning. I am grateful to both Andy and Erich for helping us in our time of need.

On Thursday, February 12, we finally managed to bring it back to Gaborone. We took it to Molepolole for police inspection (the inspectors never arrived in Sojwe). Then we took it to a body shop in Gaborone. The initial quote for the repairs is 23,200 Pula, but we got it down to 20,000 Pula.

1.
My Toyota Land Cruiser lying on its side (the driver's side) after an accident. Do you see how it is on a ridge. That allowed us to leave by the driver's side window. 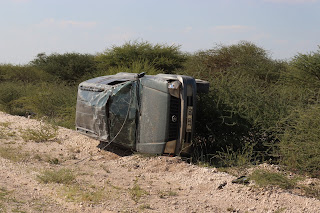 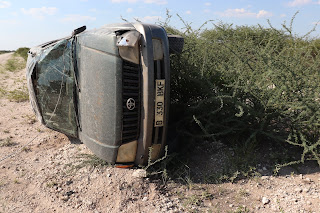 3.
A picture from the rear. Notice the thorn bushes. The people who stopped cut all those away for me. I am very grateful to them. 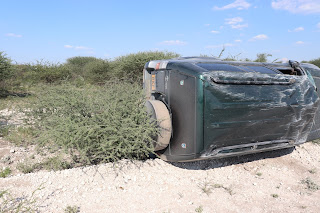 4.
A better picture of the thorn bushes off the side of the road. Once the bushes were cut down, a rope was attached under my vehicle to the back of a 4x4. 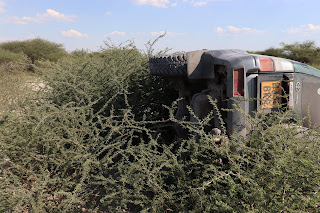 5.
Me standing in front of my car. I am definitely not smiling here, I am squinting my eyes because the sun is so bright. 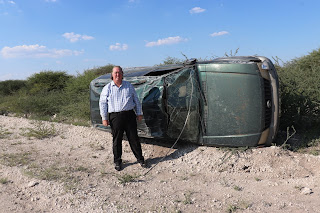