Here is my solar power set up for 2019-2020. Some of this post is modified from a Facebook post on December 19, 2015, when I had a similar set-up. The whole system cost roughly 740 US dollars (panel, inverter, controller and battery). There are photos of the set-up at the end of the post.


I work in two villages (Mokgenene and Diphuduhudu) that do not have electricity. I am also making trips to a cattle post near Mokgenene, which also does not have electricity. I used the panel to power my computer, which is essential for my work. I also used it to charge the DSLR camera batteries (I have three camera batteries, each of which lasts about an hour and a half and each of which takes an hour and a half or more to charge) and the microphone batteries and to charge my cell phone (and the two cell phones of my assistant). I think I could have charged a few more things as well, maybe some lights or even a second computer.

It works great. With the 135W panel, I never ran out of electricity, even if I only charged the battery half a day (because I was away from the house, or because the sky was overcast). The 135W panel was clearly more powerful than the 80W panel I had in 2015-2016, which would have problems from time to time, especially if we only charged half a day.

Most of the equipment was purchased at Sunkist on Kubu road (plot 5678), in the Broadhurst Industrial area of Gaborone. Here is a picture from Google Maps:

Part of the reason why the equipment is so easy to get in Gaborone is that lots of people use solar panels at their cattle posts. Also, in villages lacking electricity (such as Mokgenene and Diphuduhudu), a fair number of people have small solar panels to power radios and cell phones. I am not an electrician. The components were suggested to me by the salesperson at Sunkist, and they all work well together.

Basically, the routine is that every morning the solar panel is placed outside facing as directly toward the sun as possible. The panel is heavy and long, so it is useful to have two people take it out. To be honest, one fears dropping it, since it is made of glass and other breakable materials. Similarly, it should be packed in its protective cardboard box when transporting it to the village. After noon, the direction of the panel needs to be changed. Once you bring the panel in at night, the battery is still charged and can still be used. We measured the charge left in the battery by counting the number of red bands on the inverter. The highest number of bands we ever reached was 7. If it got down to 4, we were running low. Usually it hovered around 5 or 6.

Once the system is put together, it is easy to use. Putting it together involves several steps (Blesswell put it together in 2015, and Zach did in 2019). There are short cables (red and black) coming from the panel. These cables need to be attached to longer red and black cables that run to the controller. On my set up, the panel is outside in the sun, but the controller, battery and inverter stay in the house where it is cool. So there needs to be around 2-3 meters of cable running from the panel to the controller. The controller is attached by red and black cables to the battery. Finally, the battery is attached by red and black cables to the inverter. The appliances (e.g., computer) are plugged directly into the inverter as if it were a wall socket. To put the system together, you need a small Phillips screwdriver, a knife to cut and strip the cables, and some electrical tape.

Using the solar panel is like snatching valuable energy out the atmosphere for free. And every time I use it, I wonder why people in the US do not use solar power more. I am tempted to set up a solar panel on my NYC balcony to power my appliances in my apartment, e.g., my computer, lights and maybe my television. I would really like to see how far I can go with a few solar panels. 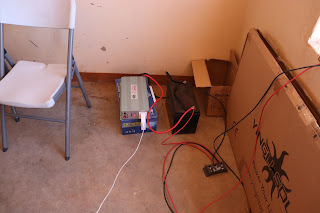 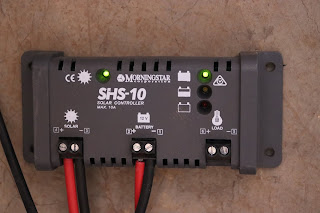 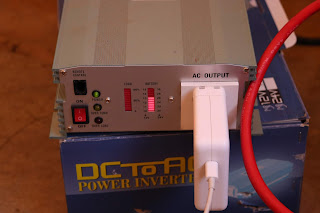 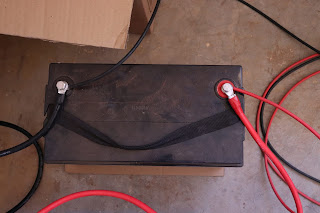 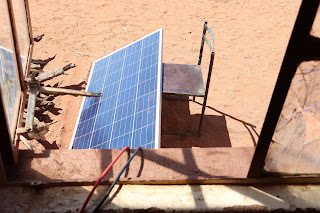 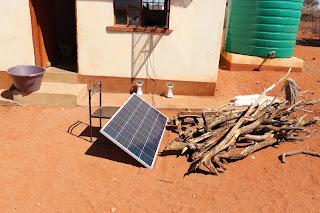