A report on fieldwork on Sasi conducted in Gaborone from Sunday January 26 to Friday January 31. Some pictures are included at the end of the file.


On Saturday, January 25 2020, I spent nine hours on the road to pick up my consultants, including three hours on cattle post roads, and another two hours on a gutted out gravel road covered with rain filled puddles. Cattle post roads are narrow roads meant for donkey carts, rugged 4x4s and cattle. I drove for about 2.5 hours out of Gaborone wondering if I was going to make it to my destination (the remote cattle post). I did not know if it had rained there. Luckily, it had not rained on the cattle post road, which meant that the roads where relatively dry. This meant that I did not have to leave the road (and drive in the bush to avoid huge puddles). Also, I only had to engage the 4x4 one time to get out of mud (about a foot deep).

The upside is that I am able to work with the oldest living Sasi speaker for the next week. I estimate that she is around 100 years old (based on the age of her oldest son). That speaker, who I will call M, refuses to live in a village. That is why she and her family are all out on a cattle post, instead of in Poloka or Mokgenene. She is the last living monolingual speaker of Sasi. This means that she only speaks Sasi, and never Setswana. She obviously understands Setswana, but she never speakers it (other than copious code switching for Setswana words, and an occasional short phrase).

I picked up M, M's daughter, and another lady who I have never worked with before, who I will call MS here. The two youngest ones are probably around 70 years old each. Part of what I am doing this week is training the two younger ladies in how to do the various tasks. I plan to work one week with the consultants, and drive them back to the cattle post on Saturday February 1. Then the week after, I will go to UCONN in the US for a talk.

1.
During this week (Sunday January 26 through Friday January 31), I plan to transcribe as much of M's oral texts as possible (which I have recorded on previous occasions). I have nice high quality audio recordings of several oral texts from 2015-2016, some videos (with poor sound quality) from 2015-2016 and between 10-15 hours of video that I have taken in 2019-2020. A lot of the recent video is free form. I just set up the camera and let it go, so I need to sort through that for good stretches to transcribe. I will to do some of that sorting this week.

Given my past experience, I predict that I will be able to transcribe no more than half an hour of text this week, since I take about 60 to 1 to transcribe (one hour for one minute of text). The goal is to get the texts into ELAN (and to leave FLEx for a second round of processing). I am so slow at transcribing that I despair that I will not be able to meet my ELDP targets. Ouch!

Report: I worked on three texts produced by M, and finished transcribing them:

I essentially completed transcribing these three texts. I might check some problematic passages with a different team in the future. And I need to run through the Setswana and English translations for consistency.

I paste the transcription of the "Motokwane" text below.

I was not able to transcribe any of the newer recordings from 2019-2020, but I did look through the files and find a few clips that I want to transcribe. For those, I created the ELAN files.

2.
I also hope to be able to make some more videos of M. As I have said, I have a number of nice oral texts from 2015-2016 but they are all audio. I would now like to rerecord them on video if possible. I intend to reserve one full day to rerecording old audio texts as video. The first text we will work on this week is one of the audio texts from 2015-2016, where she describes her father's hunting. She obviously loved and admired her father a great deal.

M is looking very healthy and energetic for her age. She is one of the few consultants I have had who does not drink, and I believe that that is a major factor in her good health.

Report:
I used Friday morning  to shoot some video. M seemed to be a bit tired, so her videos were shorter and more subdued than usual. Also, I did not connect the Rode Mic well to the T7i, so we only have the lav recording (very good quality) and the in-built mic recording (not so good). I am a little sad about that, since I like the openness of the Rode mic. 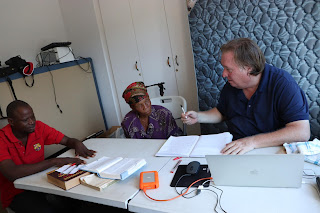 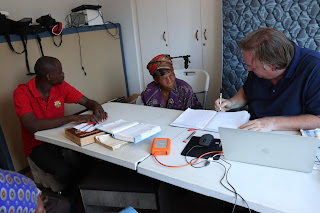