(The following is a guest post by Henk van Riemsdijk responding to the following post:
https://ordinaryworkinggrammarian.blogspot.com/2020/05/the-beginning-of-syntax-version-3.html)
I am a grammarian. I am also sort of working (though the amount of work is gradually diminishing). And, as is made abundantly clear in Chris Collins’ post, I am an ordinary working Grammarian, but I do think that ordinary grammarians can often contribute ideas and, perhaps, even insights into issues that belong to the realm of UG. I choose a different wording here, but I think this too is quite close in spirit to the position that Chris Collins defends.
Let me start with a remark on the Wiley-Blackwell Companion to Syntax. Needless to say I am completely in agreement with the usefulness of such a hefty tool for linguists, but we (Martin Everaert and myself) never had the ambition to make this tool complete. And it is easy to see why. New topics on only partly known or completely unknown phenomena are discovered and, hopefully, presented to the linguistic community. And the same is true for phenomena that have been discovered, studied and published when they are extended to apparently closely related phenomena in languages in which they have never been investigated yet. As a result, it is obvious that the Syntax Companion can never be complete but must always be seen as an incremental tool.
But we also have to realize that the incompleteness of the Companion can also be the result of the difficulty in finding a suitable author or to have an author who for whatever reason has been unable to discharge his or her obligation. To give just one example, we had planned a chapter on parasitic gaps but the author did not manage to deliver his/her chapter despite considerably extended deadlines. The Companion to Syntax that is currently being offered on the market is the second edition (2017), and it is almost double in size compared to the first edition of (2006). But it is clear to us, and also very desirable, that expanding the Companion will, in the future, be a process of continually revising and extending the Companion by making the online version the main and ultimately the only version.
It is worth mentioning that the writing of grammars of a language is very similar to the creation of Companions. In Chris Collins’ post, the Cambridge Grammar of the English Language (CUP 2002) is called “close to being fully exhaustive.” At the time that may have been a correct characterization, but there is now a Syntax of Dutch by Hans Broekhuis (and some collaborators) which consists of 8 volumes and a total of 4376 pages. Already a 9th volume is in the making. Furthermore, these volumes are accessible on the internet under the address  www.oapen.org.
A second observation that I consider to be relevant in this discussion about “ordinary syntacticians” and “UG-fanatics” concerns the degree of flexibility that the latter allow themselves. By this I mean that strict UG, as Chris Collins puts it, is subject to tunnel vision, or data blindness, or canalization. Take the notion of “canonical tree structure”. In my perception most syntacticians adhere quite strictly to the properties of canonical tree structure: no ternary or n-ary subtrees; no crossing branches; etc. There are plenty of ways in which we could imagine trees to be structured differently. Limiting myself selfishly to one favorite proposal of mine, consider what I have called grafts (see Van Riemsdijk (2001) and (2006)).  A simple example of a graft is found in expressions like a far from simple matter. Intuitively we want to say that simple is the head of the Adjective phrase that modifies the noun phrase headed by problem. But if we make these assumptions, there is truly a problem because there are good grounds to assume that simple itself is structured, and the structure would have to be a head adjective with a complement consisting of the preposition far and its dependent from. However, when we make those assumptions we have a violation of the principle that the head of a pre-nominal adjective must be directly adjacent to the head noun that the adjective is supposed to modify. But now we have a paradox: for the semantics we want to say that simpIe is the head of the adjective phrase, but for the syntax it would seem that far is the head of the adjective phrase. But there is no way, under the concept of a canonical tree, to get a canonical tree structure in which both far and simple are the head adjective. In Van Riemsdijk (2001), I propose that the solution is to assume that we have two distinct structures, both canonical tree structures, that are joined together (“grafted”) in a single complex tree structure roughly as follows: 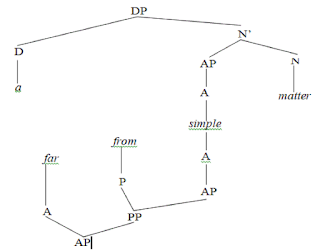 There are much more intriguing arguments in favor of grafting,  but I will limit myself to a partial list of my publications on this topic.[1]
My third (and last) point I wish to raise here concerns the question as to the extent of which the three main components of grammar (Syntax, Logical Form, and Phonology) are formally distinct or whether they overlap in some of their properties.  While there is no question that these three components must be separate in certain ways, there are also interesting questions to be asked as to whether these components can, for example, be collapsed, at least in part. For example, there may be ways in which syntactic principles might be collapsed with or taken over by some principles of logical form. The case I personally want to raise is the question as to whether the representation of syntactic and phonological objects might be thought of in certain ways or even as being closely connected or even identical.
I believe it is pretty much the standard position that syntax and phonology are fundamentally different. A prominent article that defends this position is the article called “Why Phonology is Different”. The answer given by Morris Halle and Sylvain Bromberger, the authors of the paper, is that yes indeed phonology is different.[2] This belief is most likely true in part, but there are many who seem to believe that syntax and phonology must be fundamentally and completely different. What I have always failed to understand is why these linguists are actually happy to conclude that syntax and phonology are fundamentally distinct. But suppose now that we find some principles in syntax that are so similar to some principles in phonology.  One is seriously tempted to conclude that these two principles are actually one and the same in both syntax and phonology. I, for one, consider this a truly wonderful finding, but also one that is fully compatible with the powerful assumption that economy is one of the strong conditions that determines the structure and functioning of principles of UG. Why should we not be pleased? It is a simple matter of economy. If some principle of UG does powerful work in the syntactic component, then why should evolution have insisted on having a different principle for phonology if there is a much more economical solution by making use of the principle we already have in syntax (or vice-versa of course). Indeed, we should hope to find principles general enough to serve both phonology and syntax. Much of my thinking about this big question I owe to the late Jean-Roger Vergnaud.  It was Jean-Roger who inspired me to my first article along this line of thinking.[3]
More recently I have experimented with the idea that the systems of representation in phonology and syntax might be highly similar and, perhaps even identical.  The main inspiration there is to attempt to make the systems that we use to represent syntactic and phonological representation identical in at least a number of ways. My thinking on this is still quite premature, but I have a paper in which the program is sketched.[4] Not surprisingly, there are also approaches that seem to be closer to a phonology-based conception of phonological and syntactic structure.[5]

Email ThisBlogThis!Share to TwitterShare to FacebookShare to Pinterest
Labels: syntax